Sowing the Seeds of Success

There are numerous opportunities for our children to take part in sporting events. All children take part in inter class competitions and Sports day. Some children are chosen to represent our school at cluster and county level competitions. There are both team and individual competitions. We are looking forward to a successful year of sport and will keep you informed of the results via the website and newsletters.

On the 1st of October, the girls football team competed in their first tournament of the year at The Discovery Academy. The girls came across some tough competition but showed great determination and skill to complete the tournament without conceding a goal.

The team played 6 games, with four hard-fought victories and 2 draws, culminating in the girls achieving a joint first place position a just reward for their efforts on the day.

Shannon L was the girls top scorer with 4 goals supported well by 1 goal each for Shannon B and Tatenda. The teams defence, which was rotated, protected The Meadows goal and made the teams results possible. Well done to all girls. A lot of fun was had and they have made the whole school proud of their achievements. 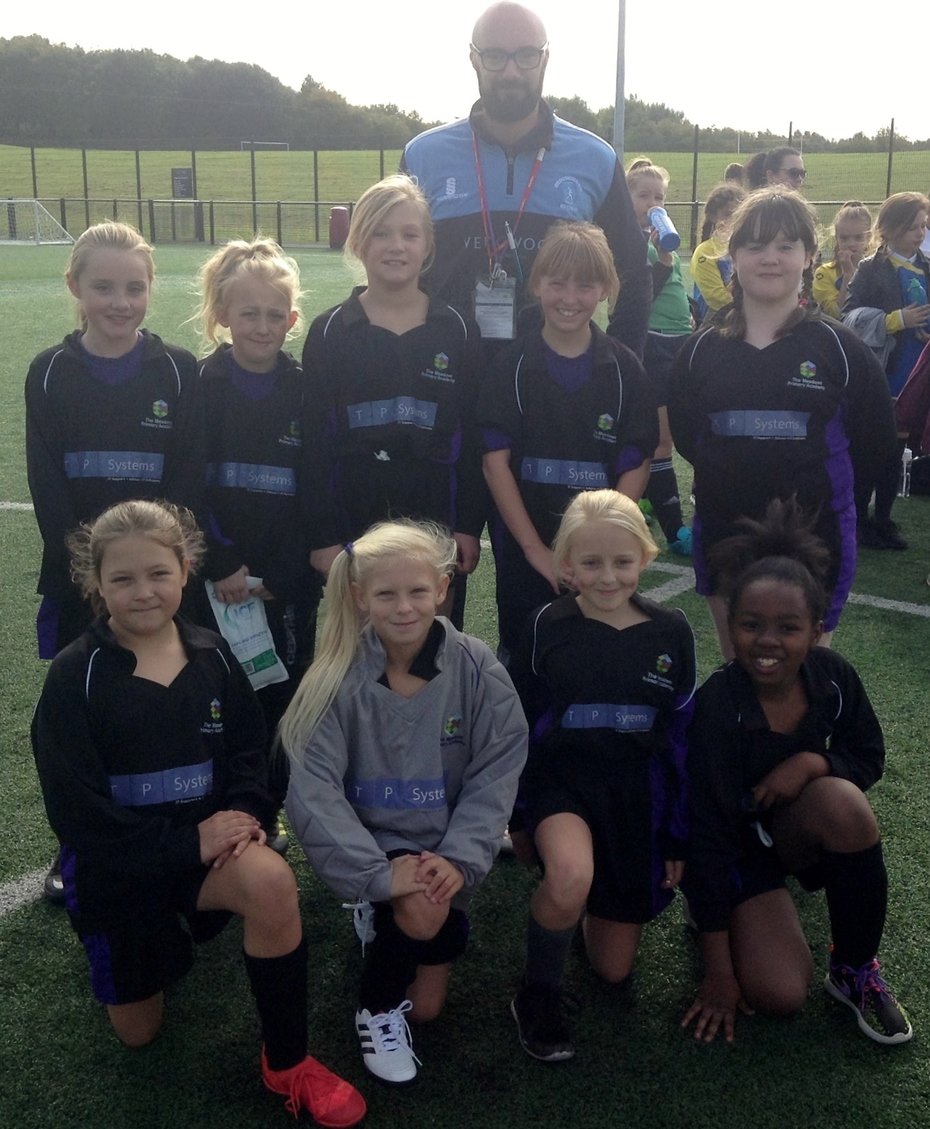 Thursday the 18th of October was the mixed football teams first fixture of the season and was a complete success.

The team traveled to Belgrave Academy and played 2 games winning 1-0 in the first and 3-0 in the second.

The performance was that of a TEAM and that team spirit helped them to win comfortably in the end.

The boy's and girl worked tirelessly for each other and should feel very proud of themselves.

A fantastic result for the team! 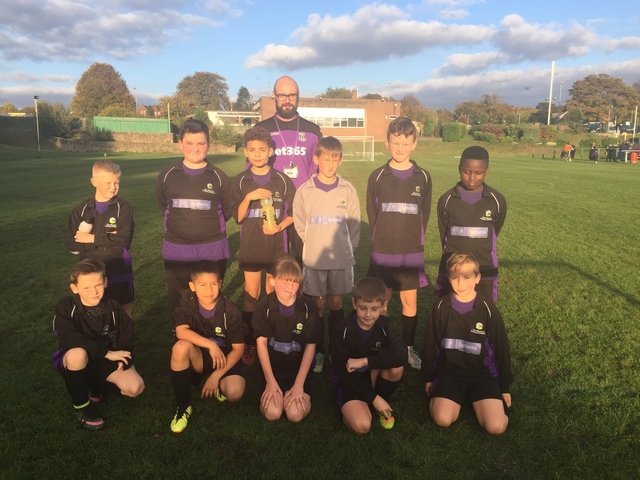 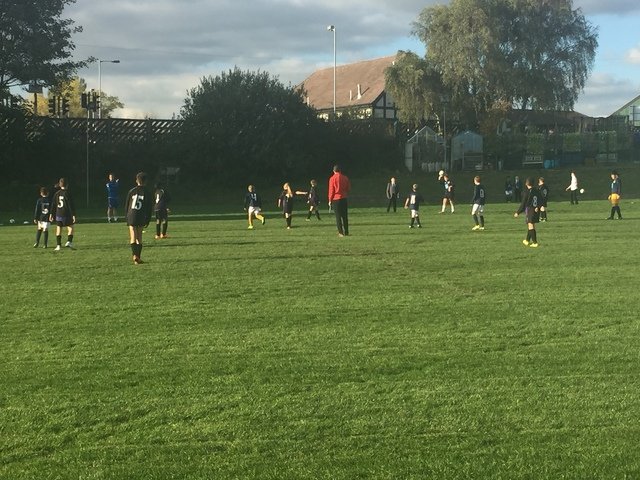 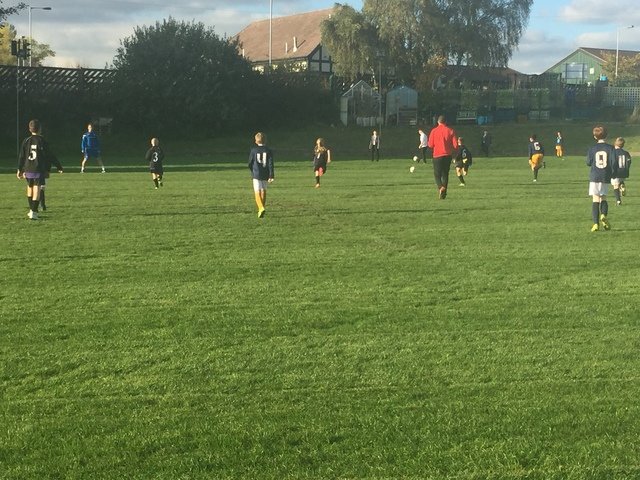 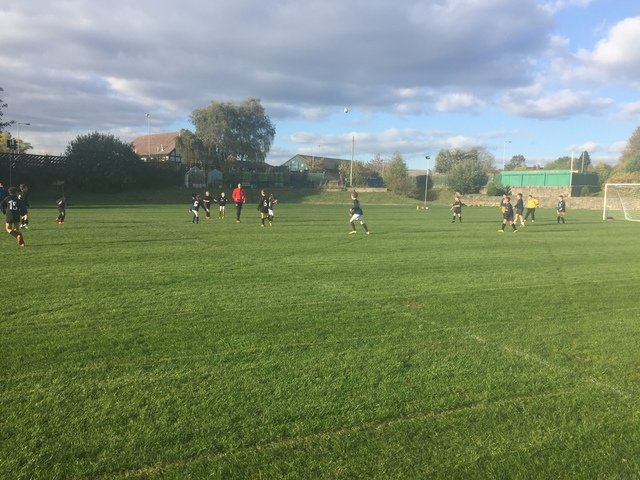 On Wednesday 7th November the mixed football team competed in the first round of the Staffordshire Schools FA cup competition versus Werrington.

The game kicked off and the Meadows found themselves a goal down within 30 seconds as they were still tired from the mammoth journey to Werrington's school. The team shortly awoke from their slumber and began to attack the Werrington goal constantly,  the pressure told as we scored a goal shortly before half time to make the scores even.

In the second half the team left off as they ended the first half with some fantastic attacking play and stern defending resulting in the Meadows scoring 2 more goals and winning the game 3-1.

Communication, commitment and teamwork were key to the success! Well done boys and girls!

The Willows vs The Meadows

A very cold afternoon saw The Meadows travel to The Willows for a fantastic and hard-fought cup game.

It didn’t start as planned for The Meadows as they were 2 – 0 down in the first five minutes as The Willows made a lively start. Events started to change however, as The Meadows familiarised themselves with the muddy pitch. The girls quickly equalled their score as it reached 2 – 2 and began to look more dominant. It was a hard – fought battle by both teams, with none intent on giving up. Early into the second half The Willows looked to be making a comeback as they levelled the score at 4-4. Despite this The Meadows were able to push on and with teamwork, hard work and a scored penalty, they were able to win the game and progress to the next round, 4 – 8.

Well done to everyone that played! 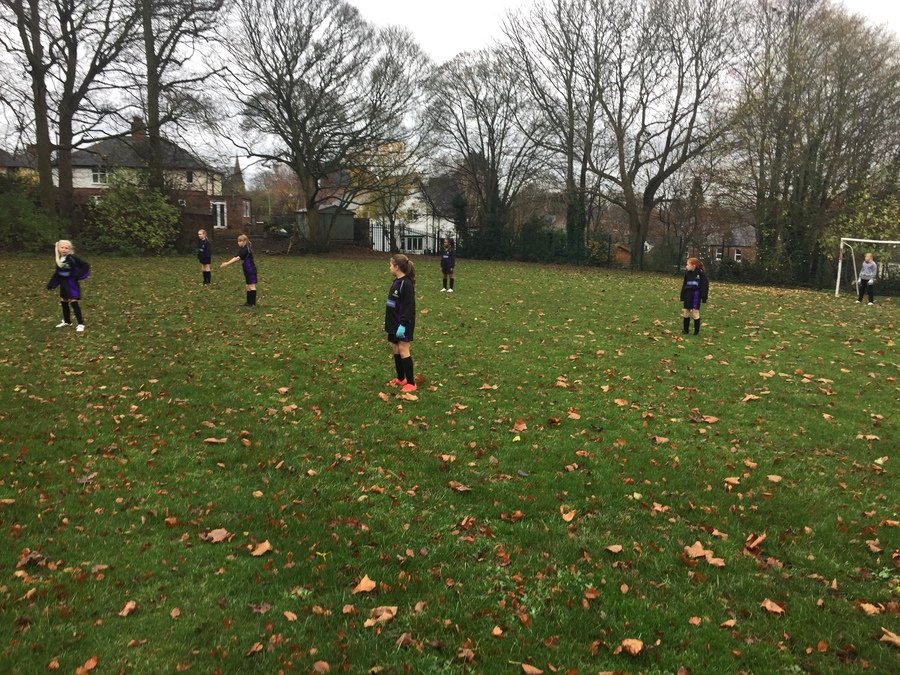 On Thursday 22nd November the football team continued their rich vein of form with another set of victories, this time against a high quality Gladstone team.

The first game was a hard fought 2-0 victory with both goals coming from Harry. The team started the second half quickly and were rewarded with an early goal a fantastic header from a corner by Harry again. The team were 3-0 up in the middle of the second game with further goals from Harry and Ben and some impressive attacking play threatening the Gladstone goal further. Gladstone never gave up and fought hard but the Meadows were just too strong and held out for a 4-2 victory.

Thanks to all parents and guardians that managed to attend the match. Your support is greatly appreciated.

On Thursday evening, The Meadows went to the Crescent Academy in the second round of the Staffs Schools FA Primary Schools Cup.

The team began the game in excellent fashion and a flowing team move ended with Harry opening the scoring at 1-0. Soon after a fantastic cross from Ben and a deft finish, again from Harry, meant the team were 2-0 up within 10 minutes. Ben extended the lead with a fine goal meaning the team led 3-0 at half time.

The team knew the second half would be more of a challenge and some excellent defending and determination resulted in the meadows leaving with a 4-1 victory, 100% record and a place in the next round of the competition.

A fantastic effort from the squad (and supporters) they have done us proud again!

On Tuesday 5th March, the team set off eagerly to St Luke's Primary of Cannock in the quarter final of the Staffordshire F.A Primary School Cup competition. The game began very competitively with both side trading blows. The St Luke's team were strong and utilised the narrow width of the home pitch to bombard The Meadows area with long throw-ins. The pressure began to tell and The Meadows were 3-0 down at half time. A change of formation at half time, a more attack minded approach, led to several chances early in the second half, all thwarted by the St Luke's keeper. The team persisted to combine play well and attempt to attack but St Luke's strong organisation and strength allowed them to stand firm. The Meadows conceded 2 late goals to lose the second half 3-0 and overall 6-0. Despite the defeat, the team worked tirelessly until the final whistle. Reaching this stage of the competition was a great achievement for the team and we are extremely proud of the squad for their efforts.

Well done and a special thanks to all parents and guardians that took the time to drive to Cannock and support the team during the match, your continued support is greatly appreciated.

On Monday 11th March, The Meadows traveled to Eaton Park to play their 3rd league fixture of the campaign. The Meadows arrived to a large pitch and goals and were behind shortly after the start from a 25 yard strike that dipped just under the crossbar. The team rallied and tried to regain control of the game but found themselves 2-0 down shortly after. Some excellent play and relentless pressure lead to several good chances for the team and Shannon, who was having an excellent game, managed to pull a goal back for the Meadows. Unfortunately, it was the last kick of the first game. 2-1 to Eaton Park.

The half-time team talk sparked some life into the team and they began strongly, battling for each ball and showing plenty of energy. The attacking play left the Meadows slightly short in defence and Eaton Park capitalised, scoring a goal against the run of play. Changes of players and formation ensued but the Meadows could not find a way past the resolute defence of Eaton Park and eventually succumbed to a second goal, an excellent finish, leaving Alfie with no chance. The team, still determined, pushed forward but ended the game on the losing side. Eaton Park 2 - The Meadows 0.

The first taste of defeat in the league fixtures didn't leave a sour taste for the Meadows (children at least) and the children did us proud again, showing great spirit and determination. Thanks again to the strong show of support from parents and guardians. 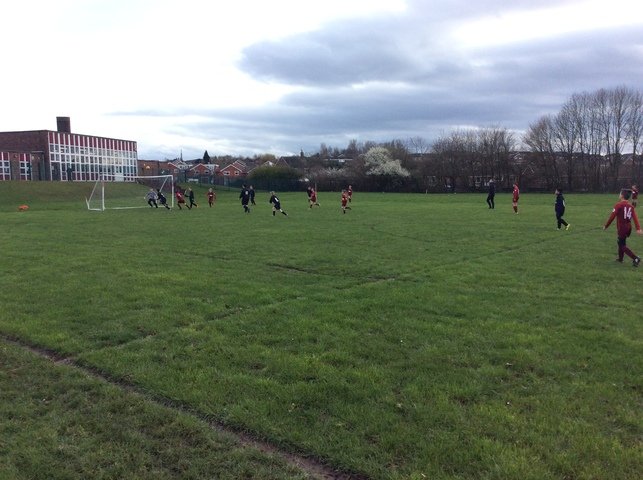 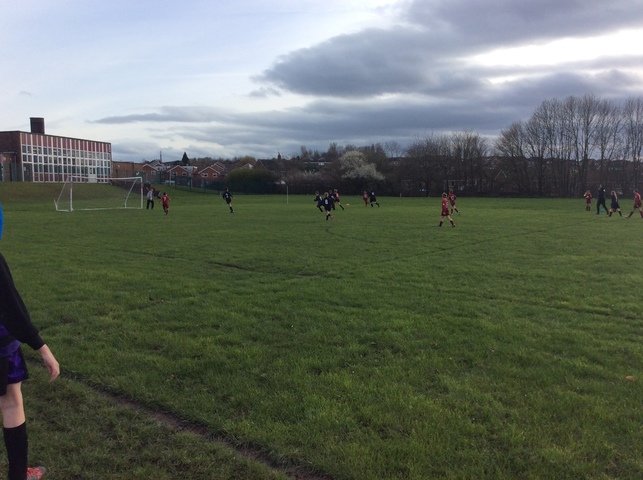 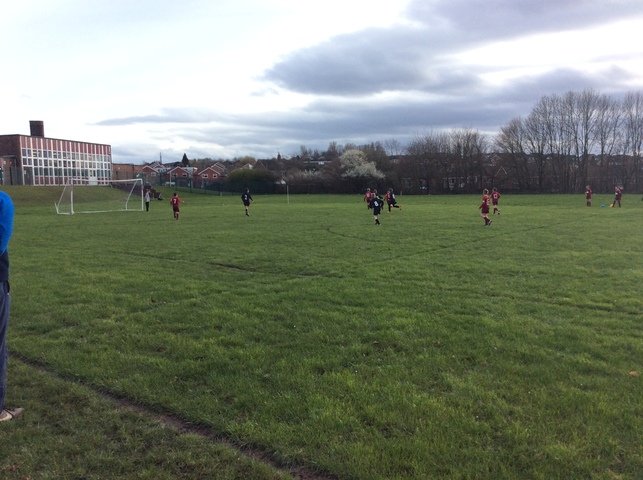 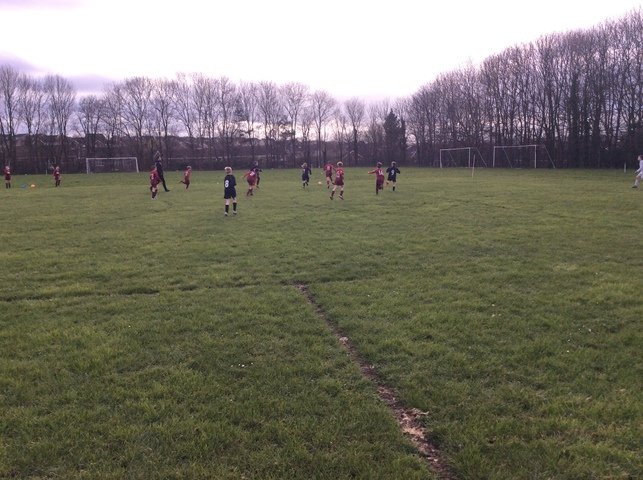 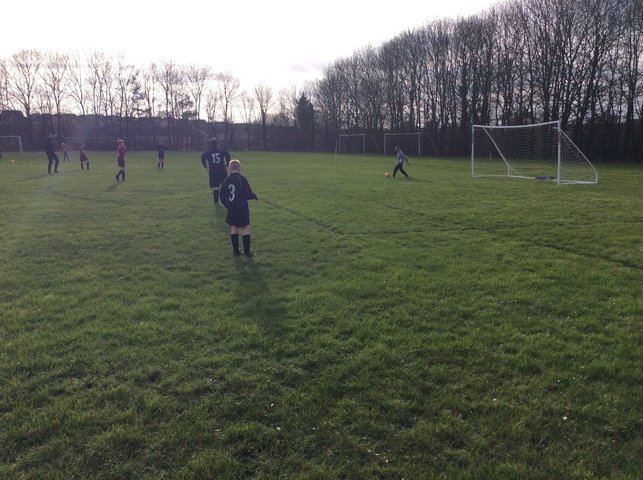 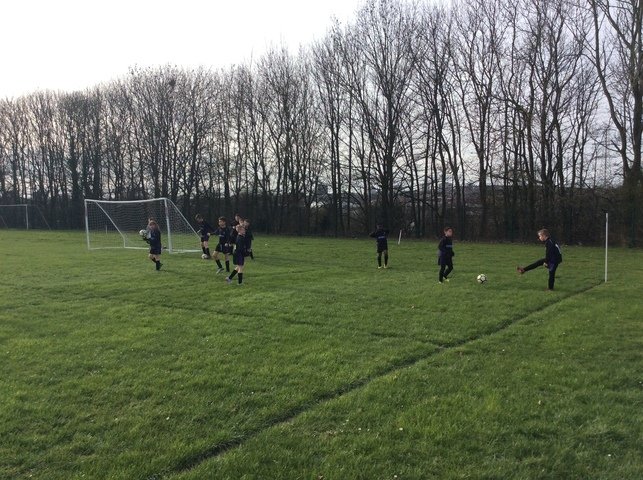 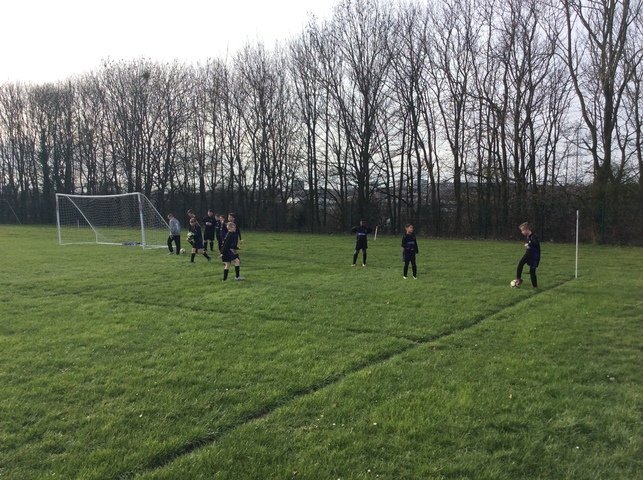 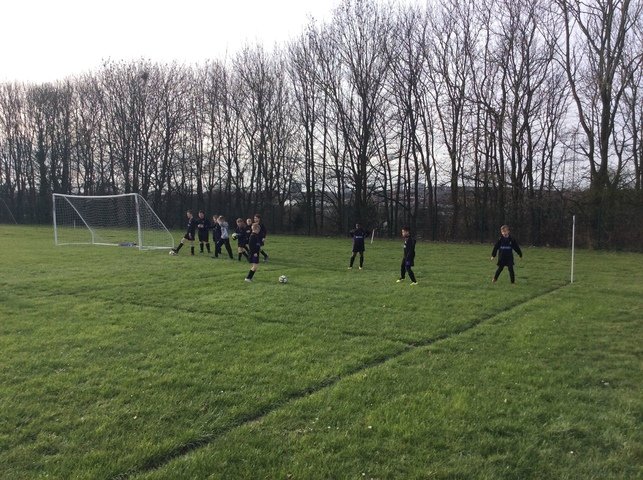 On Monday 25th March 2019 the team traveled to Our Lady's Catholic Academy, Fenton for the next round of the league fixtures, in what turned out to be two fiercely contested and well-played matches.

Unfortunately, The Meadows lost both games 2-1.  However, the games were full of exciting moments, energy and the results could of easily been different. Harry scored a goal in each of the games - taking his personal tally to 10 goals this year - a  well-deserved personal milestone.

The team have done us proud again and we look forward to returning with a win next week.

We would again like to mention the support from parents and guardians which is fantastic, thank you  for all you're support it is greatly appreciated!

On Wednesday 3rd April The Meadows team continued in the league fixtures against Werrington Primary School. The first games was a very close game with very little to separate the teams. Some excellent play by both sides meant the game was great to watch. Alfie made some great saves to keep Werrington off the score-sheet before Harry poked the ball home to give the Meadows the lead. A second - fortuitous - goal meant The Meadows took the first game 2-0.

The second game began in frantic fashion, with lots of attacking play and desperate defending at both ends. A fine-finish from Ben was the catalyst for The Meadows and as the Werrington team searched for a way back into the game, this left space for The Meadows to attack. Further goals, 1 from Shannon and 2 from Amari, meant The Meadows left victorious.

The goals helped The Meadows to win the game but the victory was built on strong defence, well done to all!

A final thank you to all parents and guardians for your continued support.